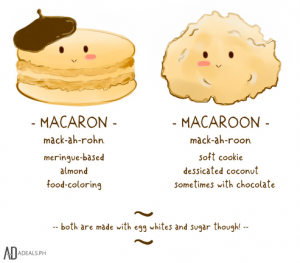 Macarons are not to be confused with macaroons. Macaroons are small and slapdash coconut haystacks, and are often dipped in chocolate.

Macarons are elegant little sandwiches that are made with meringue, almond flour and filling.
Colorful, pillowy and delicately flavored, macarons are perhaps one of the most famous and treasured French desserts.
This meringue-based sweet comes in many colours and tastes. 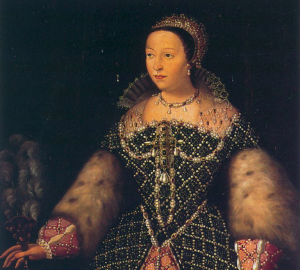 The word macaron is derived from the Italian word, maccherone, meaning fine dough.

It’s believed that the macaron cookie was born in Italy and brought over to France as early as 1533 by Catherine di Medici (on the picture), a noblewoman from Florence who married the future King of France, Henri II. The first macarons were very simple cookies made of sugar, almond flour and egg whites.

Two Carmelite nuns in Nancy, a town in north-eastern France, baked and sold macarons during the French Revolution in 1792 to support themselves. However, their macarons were a little different from ours, because they had no filling.

Over time, different regions in France adopted the recipe but the macaron as we know it today didn’t come about until the 1890s, at the Parisian confectioner La Maison Ladurée. Pierre Desfontaines, second cousin to the founder of La Maison Ladurée, began sandwiching buttercream, jam, ganache and compote between cookies. Ladurée remains one of the most popular spots for macarons in Paris and around the world! 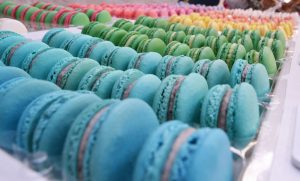 Was founded in 2005 at La Maison Pierre Hermé , another Parisian confectioner with locations throughout the world.

Today macaron is the most popular cookie in France, particularly in Paris. It also becomes a trendy pastry around the globe with so many variations in different shapes, sizes, colours, flavors, and filling choices. 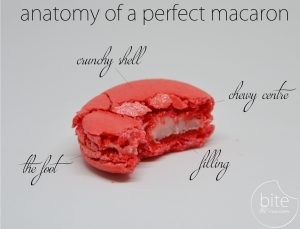 Anatomy of a perfect macaron

SHELL – a slightly shiny, thin shell with a slight crunch

FOOT – a proportional, narrow foot around the shell

CHEWY CENTRE – an interior that is soft, moist, and only slightly chewy

FILLING – a typical macaron is presented with a ganache, buttercream, jam or fruit filling